Hello, everyone, I hope many of you are doing well!

I finally, like I freaking finally found a really good book to read during this quarantine and that is of course Boy Parts by Eliza Clark. 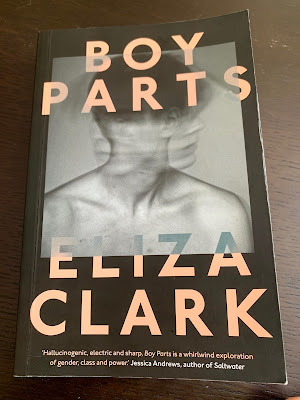 So where do I start with this? The protagonist Irina she is a photographer around her late 20’s works in a dead-end job as a bartender. “She is offered an exhibition at a fashionable London gallery, with a promising to revive her career in the art world […]” We see at the beginning of the first chapter Irina being late at her job with a hungover and so on…She receives an email that they want her to be part of an exhibition and she of course says yes (who wouldn’t say no? We as an artist want exposure to survive this capitalist world.)

We get to see how her relationship with drugs and people she surround herself with goes to down the hill. Until understanding why she is a trainwreck and why she keeps making some questionable decisions until mid-ending of the book. I won’t be spoiling much about this book because then I will be giving the magic away and I don’t want that. Again this novel is amazing to the point that I think that Marquis De Sade may even enjoy this book and George Bataille would approve this novel.
Boy Parts breaks many taboos, we see Irina personality as a narcissism, somehow a dominatrix, lot of violence but it also has their funny moment and I can assure you that you will be holding this book tightly on wanting what going to happen next or knowing what going to happen next but still want to see (well, reading) that moment.
So, if you are into some dark comedy exploring taboos region sexuality, gender role, and so on…This book is for you!

I do see myself adding Boy Parts on my upcoming thesis that I’m currently researching right now and I hope in the upcoming future Eliza Clark write more novels similar to Boy Parts (or add a sequel…I don’t know but I do feel like Kylo Ren meme saying “more” several times).

Again, I highly recommend this book you can get it at Influxpress.com support indie writers and give some love to Eliza Clark you can follow her on her Instagram @fancyeliza and her Twitter @FancyEliza

This error message is only visible to WordPress admins